The Future of Sustainable Fisheries

Fish are big business. Fully half the world’s population relies on fish as a major source of protein. As one of the most highly traded global food commodities, fish fuel a $362 billion industry that employs tens of millions of people and feeds billions more.

As the global population grows, demand for fish will continue to rise, leaving more businesses, jobs and livelihoods dependent on already strained stocks.

The long-term outlook for the seafood sector tracks closely with the health of the marine environment, and our ocean is at its healthiest when its biodiversity is protected. Simply put—saving the ocean is good for business.

There is general consensus that there are too many boats chasing too few fish. Today, four million fishing vessels ply the ocean, and many are equipped with technologies that make it easier to locate and catch fish. That reality, combined with insufficient fisheries management and enforcement, have maxed out some stocks and depleted others.

Illegal catches and trade, which generate tens of billions of dollars every year, drive overfishing in many regions. The opaque supply chains that easily hide this activity stem from both an absence of systems to track fish from catch to consumer and lax import controls throughout much of the sector.

If left unchecked, harmful fishing practices can deplete populations of non-targeted species, such as sharks, whales and turtles, as well as damage important marine habitats like coral reefs and mangroves.

WWF recognizes the Marine Stewardship Council (MSC) standard as the leading environmental standard for wild-caught seafood. In order to increase the performance of fisheries and decrease negative impacts on the water, WWF supports fishery improvement projects (FIPs) and other efforts that aim to increase a fishery’s performance and help it meet the requirements of the MSC standard. Across the seafood supply chain, WWF is working with retailers, food service companies, manufacturers, and suppliers to responsibly source seafood from fisheries that are MSC certified.

WWF US is partnered with nearly 80 companies that have public commitments to more sustainable seafood sourcing covering over 550 unique fisheries. These fisheries reach 30% of global wild capture harvest.

WWF has identified the following as major threats to resilient oceans that sustain marine life and functioning ecosystems that support rich biodiversity, food security, and sustainable livelihoods. Mitigating these threats is embedded in the core of the MSC standard and WWF approaches to fisheries improvement. 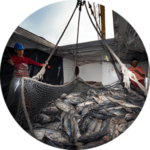 Decades of overfishing and destructive fishing, both legal and illegal, have resulted in the precipitous decline of key fish stocks, such as bluefin tuna and Grand Banks cod, as well as collateral impacts to other marine life and ecosystems.

The most recent analysis shows that the number of overfished stocks has tripled in half a century. Today, one-third of assessed fish populations are harvested at biologically unsustainable levels. We know much less about the unassessed populations—up to 80% of stocks globally—which are often fished under challenging and dynamic political, social, and economic conditions. 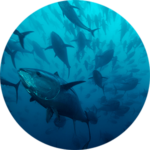 Seafood travels through a complex global supply chain that is weakly regulated and enforced. As a result, illegal fish can enter the market quite easily and, once intermingled, illegal products are very difficult to detect.

IUU fishing drains ecosystems, coastal economies, and the global marketplace. Not only is IUU a key driver of global overfishing, it is a threat to marine ecosystems, a risk to food security and regional stability, and an enabler of major human rights violations. Organized crime experts estimate the value of this illegal activity ranges from $15.5 billion to $36 billion a year. 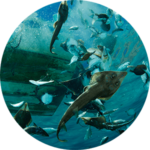 The incidental catch of non-target species in fishing operations accounts for the loss of hundreds of thousands of marine mammals, seabirds, and sea turtles, alongside tens of millions of sharks, each year. Many of these species are endangered and protected, while some such as the vaquita, Eastern Pacific leatherback turtle, and Maui dolphin are on the brink of extinction.

Despite new technologies and industry recognition of the issue, bycatch is still a major problem that causes avoidable deaths and injuries in vulnerable wildlife populations.

Improving How the World Catches and Manages Fish

WWF actively supports companies throughout the seafood supply chain to advance responsible seafood production by measurably reducing the key impacts of fishing on the marine environment and the communities that depend on it for their livelihoods. WWF recommends companies take a comprehensive multi-faceted approach to source sustainable, responsible, and traceable seafood by engaging and transitioning fisheries to improve their management and production practices. 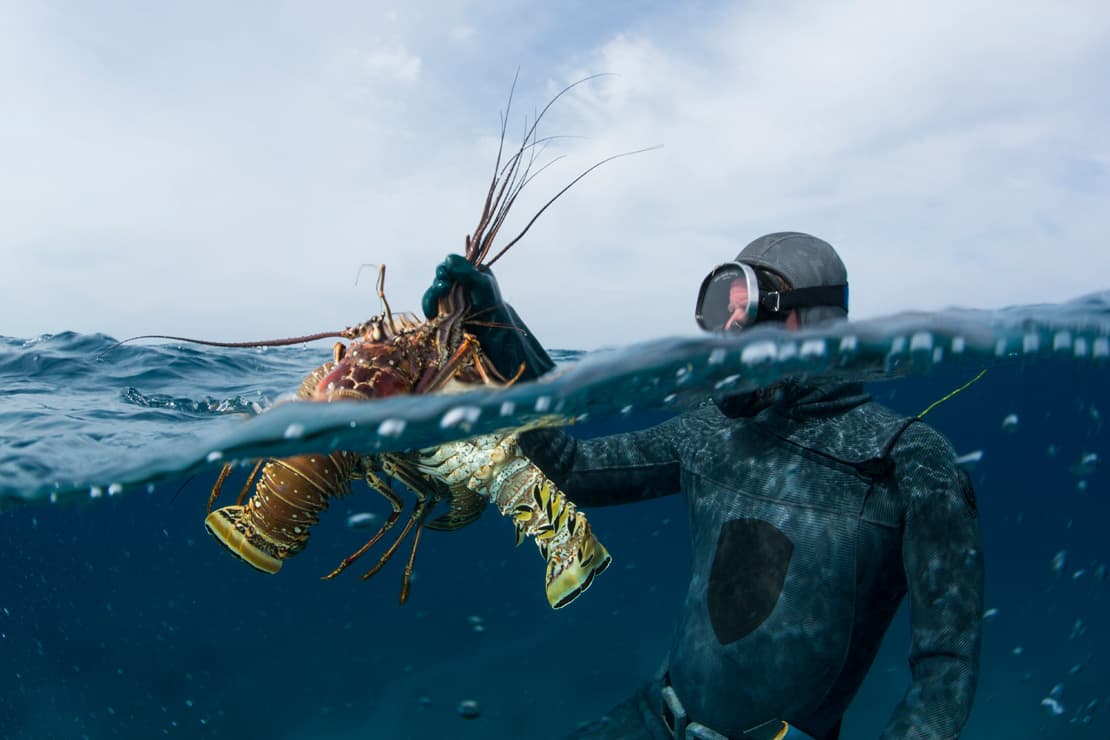 Over the last ten years, fishery improvement projects, known as FIPs, have proven that sustainability can be advanced by benchmarking a fishery against a credible, science-based standard, identifying and quantifying needed improvements to bring the fishery’s performance up to that standard, and coordinating key stakeholders to implement the needed improvements, all while applying market and industry support to incentivize change.

By engaging fishers, industry, researchers, government and NGOs, Fishery Improvement Projects (FIPs) help to improve fishing practices and management to increase a fishery’s performance and help it meet the requirements of the Marine Stewardship Council (MSC) standard. WWF recognizes the MSC standard as the leading environmental standard for wild-caught fisheries. 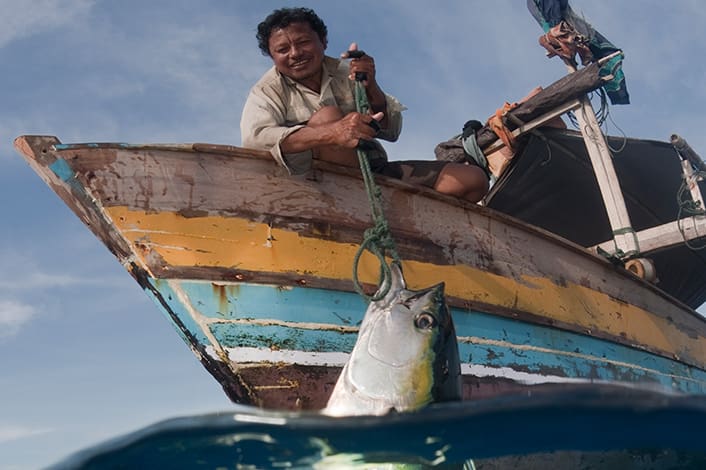 The global transition to sustainable tropical tuna fishing is an example of how scaling fishery improvement work can create systemic change. WWF approaches this transformation through the global marketplace and regional tuna fishery management organizations.

For example, the canned tuna market is a concentrated sector that can be leveraged for maximum impact on the water and in decision-making. WWF is a founder of the International Seafood Sustainability Foundation (ISSF), which drives change down the supply chain by rallying the world’s major tuna processors and brands to commit to science-based standards of practice.

Not all tuna fisheries are large-scale, so WWF is also investing in supporting small-scale tuna fisheries and coastal communities through technical capacity and research.

By engaging fishers, industry, researchers, government and NGOs, Fishery Improvement Projects (FIPs) help to improve fishing practices and management to increase a fishery’s performance and help it meet the requirements of the Marine Stewardship Council (MSC) standard. WWF recognizes the MSC standard as the leading environmental standard for wild-caught fisheries.

To learn more about WWF’s work on tuna, click here. 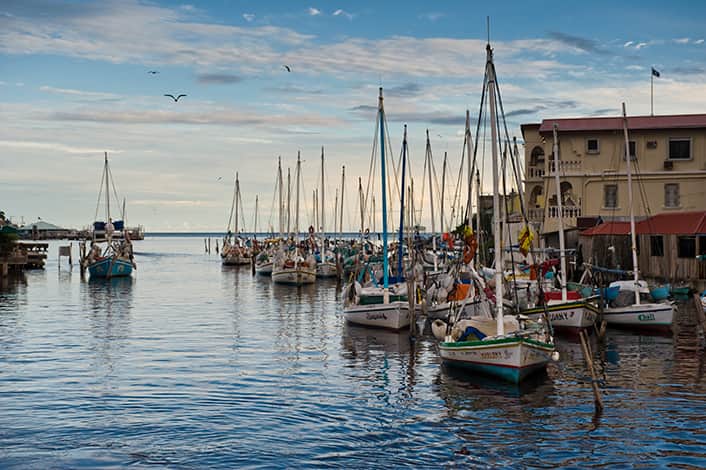 WWF has been working with leaders in the public and private sectors to improve traceability in the seafood supply chain in the US and around the world. We’ve collaborated on a set of principles for traceability, which allows us to focus our efforts on helping industry implement best practices.

In concert with the Global Food Traceability Centre (GFTC), FishWise, Future of Fish, and other NGOs, we are helping industry develop a unified framework to facilitate the flow of information through supply chains, engaging industry, developing practical tools, and modelling costs and benefits.

The Global Dialogue on Seafood Traceability is an international, business-to-business platform convened by WWF and GFTC to produce the first-ever industry-wide voluntary standards for seafood. The GDST brings together dozens of major seafood companies from around the world, representing over $35 billion in annual seafood sales. This work will help the seafood industry establish common goals and technical design standards for traceability to facilitate the flow of information through supply chains. 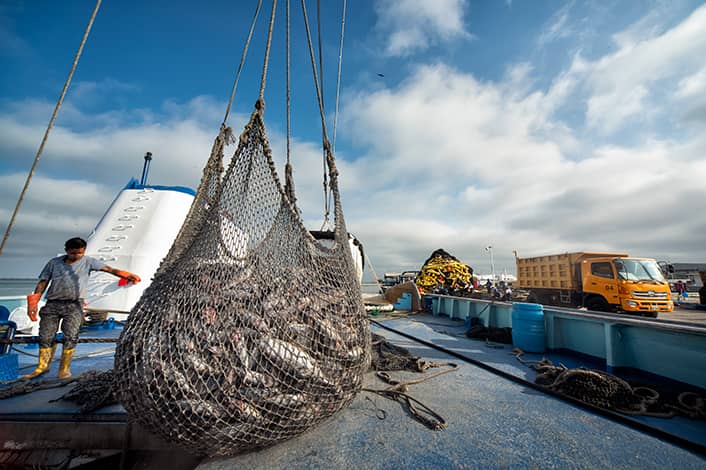 Halving the haul of IUU fish

WWF is working to reduce illegal fishing by 50% globally through a combination of governance, enforcement, innovation and engagement.

Our multi-faceted approach includes aligning national and international requirements for effective governance and increased transparency. While there are strong anti-IUU government programs in places like the US and European Union, these measures must be fully implemented and further strengthened.

WWF continues to collaborate on cost-effective methods to track fishing activity and trade. We worked with partners to develop and deploy a big data analytics tool that allows users to sort through trade data and zero in on potential pathways for IUU product to travel through international supply chains.

A tiered stepwise approach to engaging fisheries in their transition to sustainability.

How to Support Fishery Improvement Projects

What a FIP is, why you should support a FIP, what it means to be a FIP participant, and a list of tools to help establish a FIP if one does not already exist.

By signing on to support a FIP you are joining forces with other leaders in the industry that seek to help conserve marine ecosystems, protect livelihoods, and increase the number of sustainable fisheries and the overall supply of sustainable seafood.

To learn more about industry engagement at WWF, please contact our team at info@nullseafoodsustainability.org, or via the contact form below.