By Wendy Goyert and Pablo Guerrero

Fishing for mahi mahi in Ecuador may look much like the artisanal craft it has been for decades, but practices on the water are very different than just a few years ago.

Ecuador’s mahi – or “dorado” as it’s known in Ecuador – is hand-caught by longline fishermen. These fishermen work from boats called “fibras” (a reference to their fiberglass hulls). Each of about 300 “nodrizas” or “mother ships” tows as many as 10 fibras into place. These mother ships, powered by inboard motors, are capable of traveling hundreds of miles to find the highly migratory fish. They also serve as floating hotels for fishing crews out to sea for days.

Mahi is Ecuador’s largest fishery, landing 22 million pounds in an average year. In addition to its importance to the national economy, Ecuador’s mahi fishery is among the world’s largest. And with most of its product sold to American buyers, Ecuador mahi can be found at in the fish cases and on the menus of U.S. companies from Kroger, Costco, Harris Teeter, and Hyatt.

But before World Wildlife Fund (WWF) and its partners launched the Ecuador mahi fishery improvement project (FIP), there was good reason to question the health and sustainability of this vast and productive fishery. There was no ongoing science, so neither industry nor government had an understanding of the health of Ecuador’s mahi stocks. There was a minimum capture size regulation in place, but with no meaningful monitoring program, it was, as WWF’s Pablo Guerrero said, “a regulation on paper only.” And even if there had been a reliable monitoring program, there was no management plan to address any sustainability issues monitors might discover. 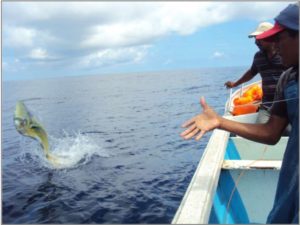 © Under Secretariat of Fishing Resources, Ecuador

That all began to change when Guerrero walked into Jimmy Martinez’ office. Martinez had been a long-serving administrator in the Ecuadoran Agriculture Ministry’s Undersecretariat of Fisheries Resources. The two men had gone to university together and known each other for decades by the time Guerrero stopped by to update Martinez on WWF’s work to coordinate fishermen, buyers, local NGOs, and other stakeholders as partners in a new mahi FIP.

Initial conversations started months earlier with Ecuador’s mahi exporters. These business leaders had seen a growing demand among seafood buyers for sustainably-harvested product. In partnership with WWF, they began to organize the fishing community, and momentum was building for a multi-sector effort aimed at improvements that would eventually allow Ecuador’s mahi fishery to meet the sustainability standards of the widely-respected Marine Stewardship Council (MSC).

Martinez had worked in industry before joining the marine conservation agency, so he understood that bringing business, conservation advocates, academics, and other key stakeholders together was an opportunity for real progress. He soon began talking with Guerrero and others about the possibility of establishing Ecuador’s first mahi management plan.

It wasn’t a quick process, or an easy one. Both Martinez and Guerrero were committed to a participatory process that brought all the stakeholders to the table. Any resulting policy would only last if key players supported it. So they began an intensive effort to convene that table and earn that buy-in. The result, announced more than a year and a dozen all-stakeholder workshops and bilateral meetings later, is called the National Plan of Action for the Conservation and Management of Mahi Mahi in Ecuador – or, colloquially, the “Plan Dorado.”

In Ecuador’s mahi fishery, the Plan Dorado has been transformational.

Where before there was no science at all, today, an annual line-item in the Agriculture Ministry’s budget funds ongoing science, and studies have been completed to assess fishing’s impact on mahi stocks and endangered sea turtles.

Before the Plan Dorado, there were a half-dozen monitors taking observations as fishermen landed tons of mahi along Ecuador’s 1,200-mile coastline. Today, there are more than 200, tracking landed volume, catch location, bycatch, capture size, and other data critical to understanding the fishery and enforcing Ecuadoran law. Monitors also facilitate traceability, by issuing certificates linking each shipment of fish to a specific harvester. 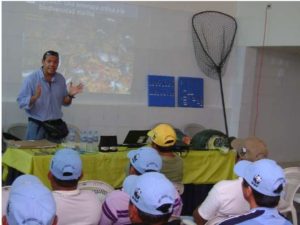 Before, conservation standards meant little, because they were rarely and ineffectively enforced. Since the Plan Dorado, the Agriculture Ministry has levied fines, suspended fishing permits, seized fish caught in violation of standards, and taken other enforcement actions. There is, of course, more work to do. Guerrero and his colleagues in Ecuador still have their eyes on the original goal: demonstrating sustainability sufficient to earn an unconditional pass of the MSC standard.

But things have changed for the better in Ecuador’s mahi fishery. Since 2012, 10 out of the 21 estimated MSC scores that were previously listed as “likely to fail” or “likely to pass with conditions” in the MSC pre-assessment have improved, according to annual reviews by an independent consultant. Those scores concern critical issues like stock status and the protection of endangered or threatened species, as well as major improvements on governance and policy and compliance and enforcement indicators.

Progress in Ecuador has even inspired increased interest in conservation among neighboring countries. The Plan Dorado is seen as a model for replication by other members of the Inter-American Tropical Tuna Commission. As a result, mahi issues are now routinely on agenda of this regional fishery management organization’s scientific and political meetings.

And Ecuador’s progress is also inspiring regional action. In 2016, scientists with the tuna commission developed the first ever regional stock assessment for mahi mahi in the eastern Pacific Ocean. This constitutes an important step toward improving the management of mahi mahi at a regional level.

WWF’s Ecuador mahi mahi FIP demonstrates that, by bringing government, industry, NGOs, and other stakeholders together, fishery improvement projects can make a real difference and improve the sustainability of threatened fisheries.